The CentOS community is trying to build an ecosystem that fosters and encourages upstream communities to continuously perform integration testing of their code running on the the CentOS platform. The CentOS community has built out an infrastructure that (currently) contains 256 servers ("bare metal" servers") that are pooled together to run tests that are orchestrated by a frontend Jenkins instance located at ci.centos.org.

Who Can Use the CentOS CI?

The CentOS CI is primarily targeted at Open Source projects that use CentOS as a platform in some way. If your project meets those two requirements then check out our page for Getting Started and look at the "Asking for your project to be added" section.

What Is Unique About the CentOS CI?

With many test infrastructures that exist today you are given a virtual machine. With the CentOS CI, when you get a test machine you are actually getting a "bare metal" machine, which allows for testing of workloads that may have not been possible otherwise. One specific example of this is testing out virtualization workloads. The RDO and libvirt projects both use the CentOS CI to do testing that wouldn't be possible on an infrastructure that didn't provide bare metal.

The CentOS CI also offers early access to content that will be in a coming release of CentOS. If there is a pending release, then the content will be available for testing in the CI infrastructure. This allows projects to do testing and find bugs early (before release).

Now that you have access to the CentOS CI you should have a few things:

The 2nd item from above is unique. In order to provision the bare metal machines and present them for testing, the CentOS CI uses a service known as Duffy (a REST API). The Jenkins jobs that run must provision machines using Duffy and then execute tests on those machines; in the future there may be a Jenkins plugin that takes care of this for you.

The 3rd item is actually specific to your project. The slave machines that are contacted from Jenkins have a workspace set up (like a home directory) for your project. These slaves are accessible via SSH and you can put whatever files you need here in order to orchestrate your tests. When a command is executed in a Jenkins job, these machines are the ones that it is run on.

What you really want, however, is to run tests on the Duffy instances. For that reason the slave is typically just used to request an instance from Duffy and then ssh into the instance to execute tests.

A Test To Run

Even though we've brought the infrastructure together we still need you to write the tests! Basically the requirement here is that you have a git repo that can be cloned on the Duffy instance and then a command to run to kick off the tests.

A very simple example of this is my centos-ci-example repo on GitHub. In this repo the run_tests.sh script executes tests. So for our case we will use the following environment varialbes when defining our Jenkins job below:

So you have access and you have a git repo that contains a test to run. With the username/password you can login to ci.centos.org and create a new job. To create a new job select New Item from the menu on the left hand side of the screen. Enter a name for your job and Freestyle Project as shown below:

After clicking OK, the next page that appears is the page for configuring your job. The following items need to be filled in:

As you can see below, for me this was the atomicapp-shared label. 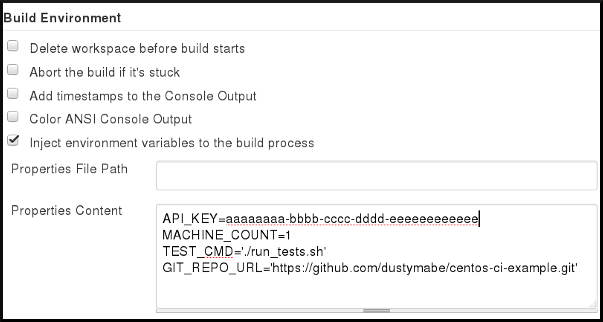 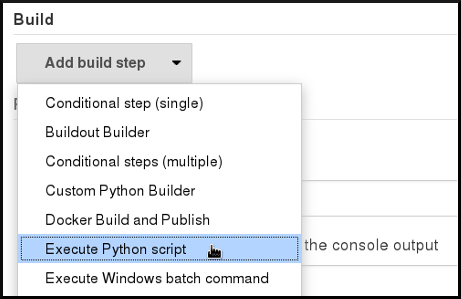 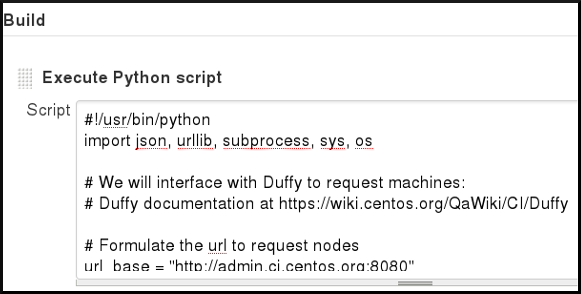 Now you are all done configuring your job for the first time. There are plenty of more options that Jenkins gives you, but for now click Save and then run the job. You can do this by clicking Build Now and then viwing the output by selecting Console Output as shown in the screenshot below: 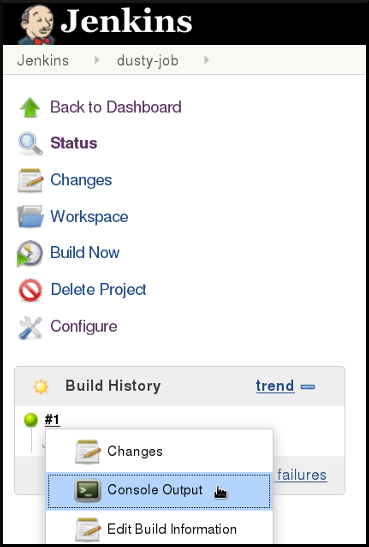 Your Next Job: Jenkins Job Builder

All of those steps can be done in a more automated fashion by using Jenkins Job Builder. You must install the jenkins-jobs executable for this and create a config file that holds the credentials to interface with Jenkins:

Update the file to have the real user/password in it.

Next you must create a job description:

Update the file to have the real API_KEY.

The last component is run.py, which is the python script we pasted in before:

Now you can run jenkins-jobs and update the job:

NOTE: This is all reproduced in the centos-ci-example jjb directory. Cloning the repo and executing the files from there may be a little easier than running the commands above.

After executing all of the steps you should now be able to execute Build Now on the job, just as before. Take Jenkins Job Builder for a spin and consider it a useful tool when managing your Jenkins jobs.

Hopefully by now you can set up and execute a basic test on the CentOS CI. Come and join our community and help us build out the infrastructure and the feature set. Check out the CI Wiki, send us a mail on the ci-users@centos.org mailing list or ping us on #centos-devel in Freenode.