In part 1 of this series we used the OpenShift Ansible Installer to install Openshift Origin on three servers that were running Fedora 25 Atomic Host. The three machines we'll be using have the following roles and IP address configurations:

In this blog, we'll explore the installed Origin cluster and then launch an application to see if everything works.

With the cluster up and running, we can log in as admin to the master node via the oc command. To install the oc CLI on a your machine, you can follow these instructions or, on Fedora, you can install via dnf install origin-clients. For this demo, we have the origin-clients-1.3.1-1.fc25.x86_64 rpm installed:

After we log in we can see that we are using the default namespace. Let's see what nodes exist:

The nodes represent each of the servers that are a part of the Origin cluster. The name of each node corresponds with its private IPv4 address. Also note that the 10.0.173.101 is the private IP address from the master,etcd node and that its status contains SchedulingDisabled. This is because we specified openshift_schedulable=false for this node when we did the install in part 1.

Now let's check the pods, services, and routes that are running in the default namespace:

*NOTE: If there are any pods that have failed to run you can try to debug with the oc status -v, and oc describe pod/<podname> commands. You can retry any failed deployments with the oc deploy <deploymentname> --retry command.*

We can see that we have a pod, service, and route for both a docker-registry and a registry-console. The docker registry is where any container builds within OpenShift will be pushed and the registry console is a web frontend interface for the registry.

Notice that there are two router pods and they are running on two different nodes; the worker nodes. We can effectively send traffic to either of these nodes and it will get routed appropriately. For our install we elected to set the openshift_master_default_subdomain to 54.204.208.138.xip.io. With that setting we are only directing traffic to one of the worker nodes. Alternatively, we could have configured this as a hostname that was load balanced and/or performed round robin to either worker node. 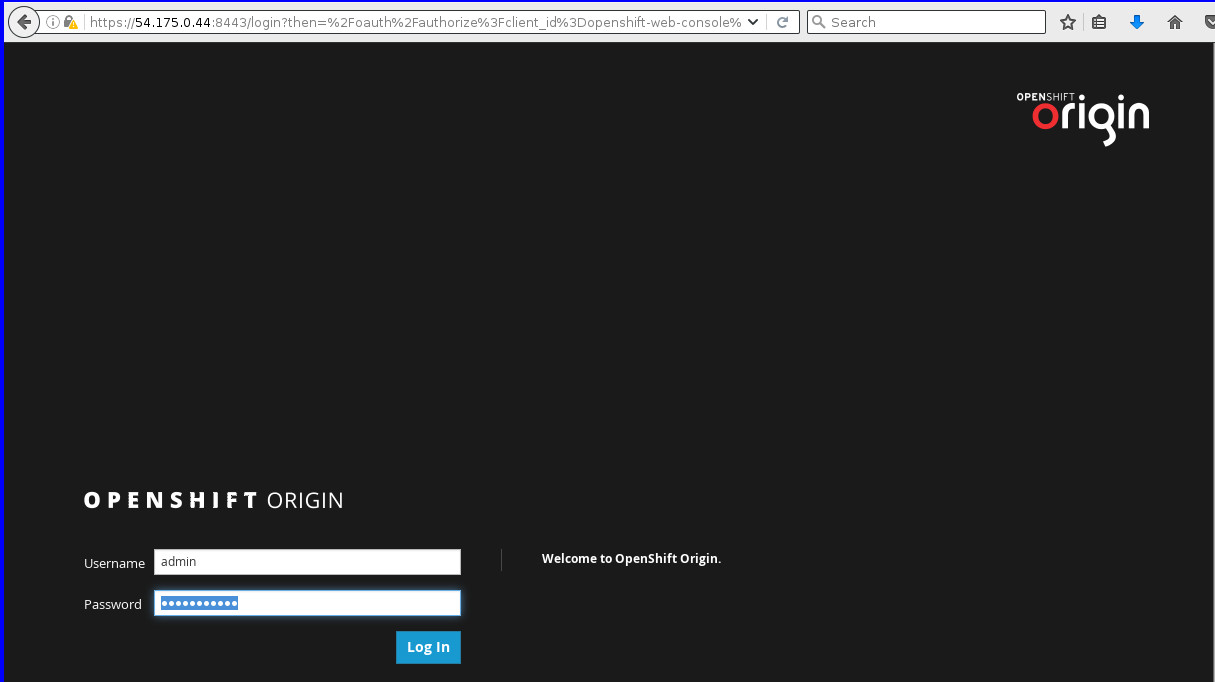 We then select the default project and can view the same applications that we looked at before using the oc command: 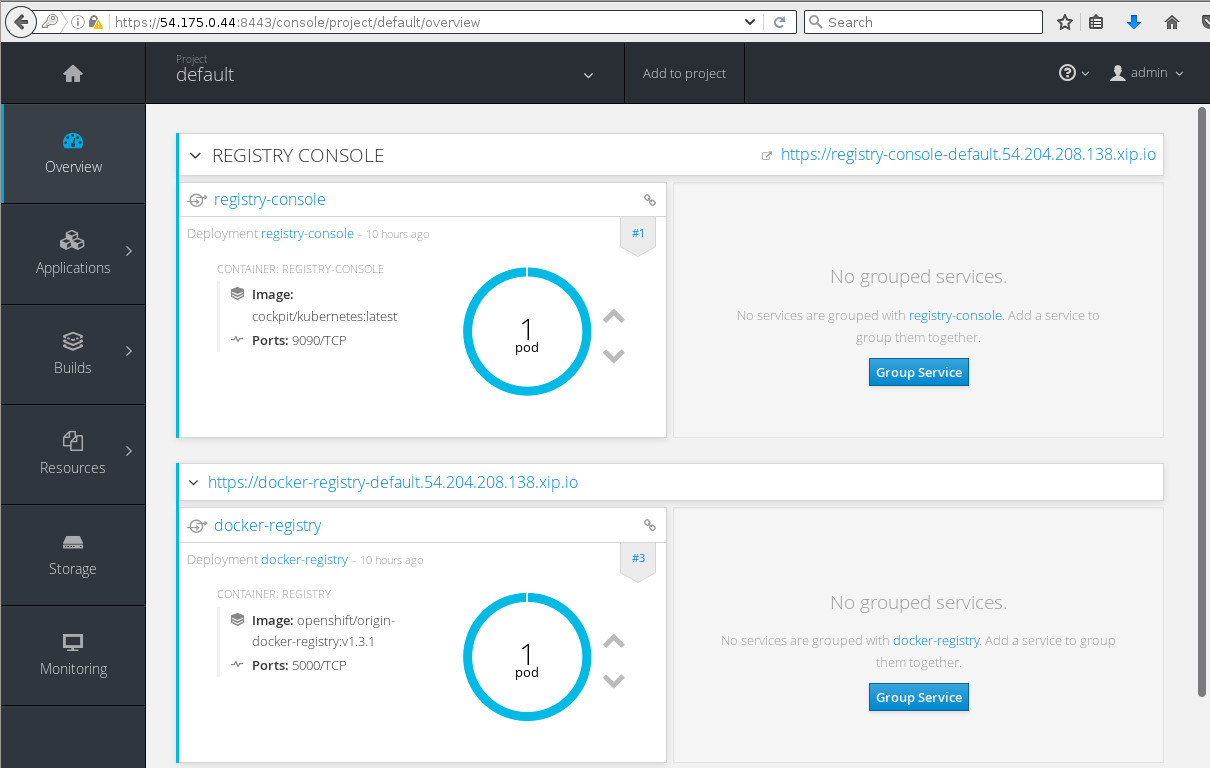 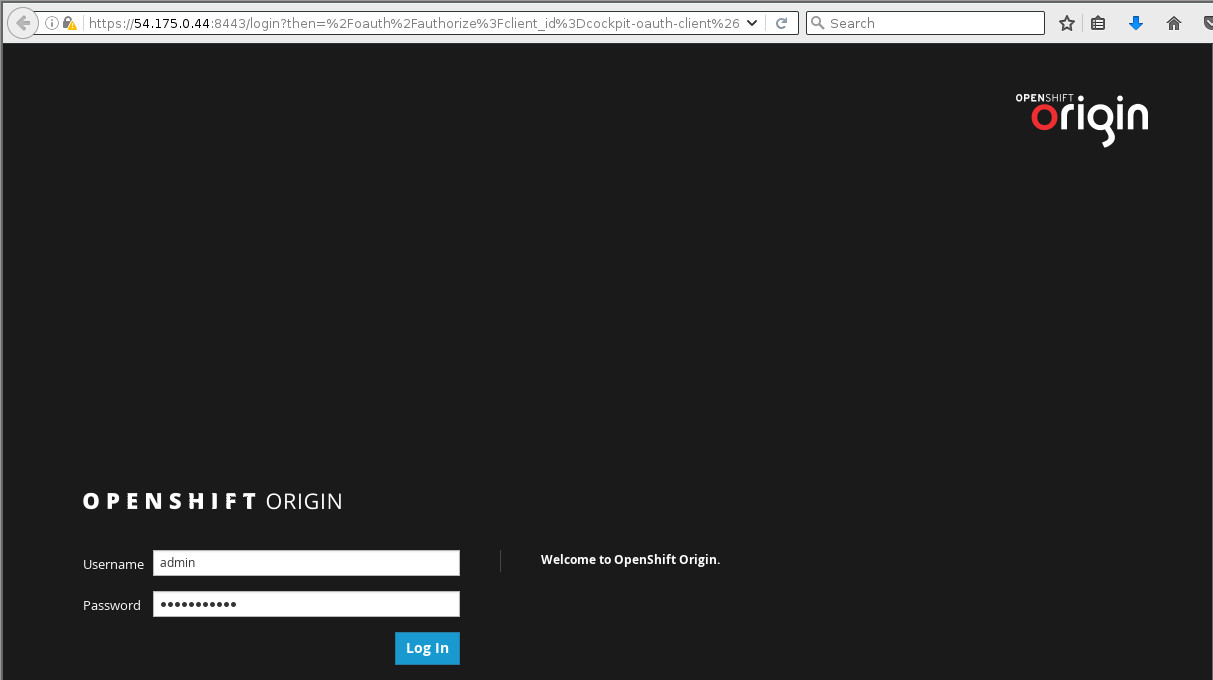 We can log in with the same admin/OriginAdmin credentials that we used to log in to the OpenShift web console.

And.. We're done! We have poked around the infrastructure of the installed Origin cluster a bit. We've seen registry pods, router pods, and accessed the registry web console frontend. Next we'll get fancy and throw an example application onto the platform for the user user.

Running an Application as a Normal User

Now that we've observed some of the more admin like items using the admin user's account, we'll give the normal user a spin. First, we'll log in:

After creating the new project the CLI tools again give us some helpful text showing us how to get started with a new application on the platform. It is telling us to try out the ruby application with source code at github.com/openshift/ruby-ex.git and build it on top of the Source-to-Image (or S2I) image known as centos/ruby-22-centos7. Might as well give it a spin:

After a short time, we check the status of the application:

*NOTE: The warning referred to in the output is a warning about there being no healthcheck defined for this service. You can view the text of this warning by running oc status -v.*

After some more time:

The build is now done and the deployment is running.

And after more time:

We have an app! What are the running pods in this project?:

The build has Completed and the ruby-ex-1-mo3lb pod is Running. The only thing we have left to do is expose the service so that it can be accessed via the router from the outside world:

With the route exposed we should now be able to access the application on ruby-ex-myproject.54.204.208.138.xip.io. Before we do that we'll log in to the openshift console as the user user and view the running pods in project myproject:

We have explored the basic OpenShift Origin cluster that we set up in part 1 of this two part blog series. We viewed the infrastructure docker registry and router components, as well as discussed the router components and how they are set up. We also ran through an example application that was suggested to us by the command line tools and were able to define that application, monitor its progress, and eventually access it from our web browser. Hopefully this blog gives the reader an idea or two about how they can get started with setting up and using an Origin cluster on Fedora 25 Atomic Host.